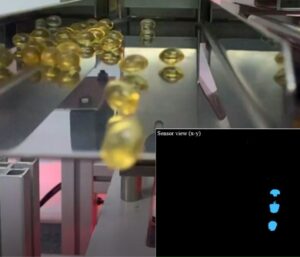 Event-based images sensors record changes in a scene instead of capturing test objects frame by frame. This allows for object tracking at high speed..

The line scan camera with integrated real-time computer was replaced by the revolutionary Event-based camera. Event-based image sensors record changes in a scene instead of capturing test objects frame by frame. This means that Event-based algorithms can track objects even at very high speeds. For the Event-based camera, neither the transparency nor the contrast of the capsules to the background is important, as the camera only makes the movement of the object visible, allowing the gel tablets to be counted.

IMAGOS Event-based camera counts moving objects at a throughput of 1,000 objects per second. The technology can be used to count a wide range of products, giving many industries a new competitive edge. The processing of the data takes place in the smart camera itself. There is no longer any need for expensive high-performance computers for ultra-fast counting.